Today has been a good food day. After having colourful potato salad for lunch, I was determined to make a dinner to rival it. And I did. The sweet potato coconut soup was a hit, and these stuffed aubergines were to die for. The original recipe called for breadcrumbs, but when I couldn’t find them in the supermarket I decided to experiment with using tortilla chips instead – an instant success!

This is something that would work well as an appetizer if you have guests (especially if you use smaller eggplants rather than the large ones I did). Alternatively, you can just do what I did and gobble it down with some sweet potato soup!

Preheat the oven to 180 degrees Celsius. Wash the aubergine and cut off the tip. Slice it carefully in half and cut out the inside, keeping the flesh aside in a bowl. Place the halves on a baking tray and brush lightly with olive oil. Bake for 10 minutes.

Meanwhile, heat the olive oil and fry the inside of the aubergine (make sure it’s in small pieces – if you had cut out the inside whole, just chop it up before frying). After a couple of minutes, add the tortilla chips, olives, almonds, mixed herbs, cumin, salt and pepper and fry for 5 or more minutes until the aubergine is completely soft.

Take the aubergine halves out of the oven and fill with the mixture. Top with mozzarella cheese and bake for another 2-3 minutes, until the cheese turns golden. Take it out, serve and devour! 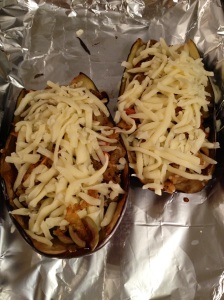