And so I found myself surrounded by wafts of roast dinner, standing beside a gravy fountain. 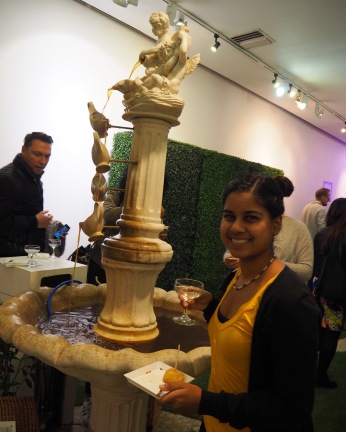 ‘The highly anticipated gravy fountain’, they called it. I don’t know about that, but it sure was impressive. It holds 60 litres of gravy, and it tasted sublime. There was a bit of a splash zone on one side, but that didn’t stop me from greedily dipping from the other side!

The space was divided into four seasons, and this fountain was merely the start. What is spring? A single roast potato, served alongside a lamb lettuce leaf, with three different kinds of caviar, each pertaining to a particular flavour that complements the potato. I munched on it happily, but the real pleasure was dunking my spud in the gravy fountain. Although I have to say that the hygiene of it was somewhat doubtful, and I’m not sure I would continue dipping later in the evening…

On to summer then, where various machinery promised to douse our potato skewers with aromatic herbs and smokey… well, smoke.

Impressive technology? Certainly. Amazing flavours? Not so much. As the gentleman in control told us, to have a proper effect on the potato, one would need to smoke it for about 24 hours. So it’s understandable that there was barely any difference in taste after 2-3 minutes (although it did smell smokey).

The ‘ice cream’ was very tasty, although disappointing for my plus one, who was expecting actual dairy rather than a cone stuffed with sausage and potato. Amazing sausages though, that’s for sure! 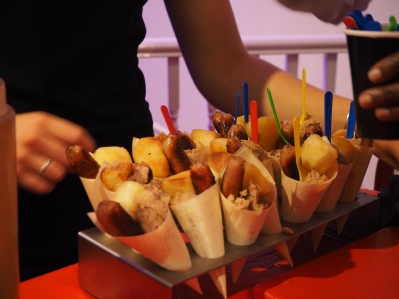 Autumnal flavours were combined with jack-o’-lanterns and foggy interiors, which meant any photos I took were unusable. Nonetheless, the lamb and cranberry meatball was delicious, although I refrained from inhaling the roast dinner smoke that was emanating from the carved pumpkins…

And then it was time for the Christmas dinner! The Robin Collective staff was wonderfully enthusiastic and quirky, inviting us into the ‘McCain house’, which was gorgeously decorated with wreaths, crackers, reindeer, stockings and a tree! Our roast dinner was very small, but the pulled turkey was lovely and tender. And that gravy again… 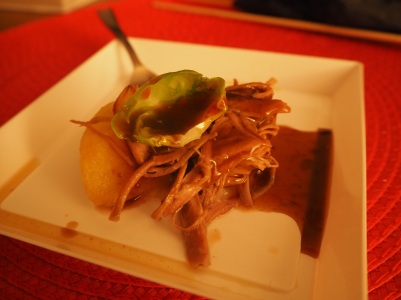 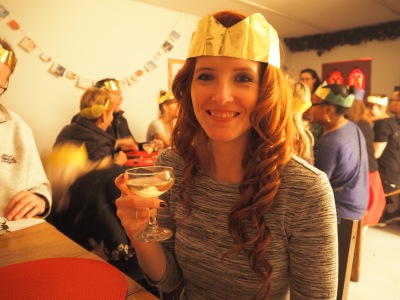 All in all, McCain and the Robin Collective put on a unique event and made great use of the space available, with the seasonal decorations, and of course the gravy fountain, being the most impressive part. The roast potatoes were stellar – crispy on the outside, soft on the inside, and piping hot all the way through. And in the end, what more do you want?

The McCain roast potato pop-up is open on 18 Maddox Street, W1S 1PL, from today (Oct 23). Tickets are sold out, but there’s a promise of more releasing soon!