An escape to Cornwall, and a review of Rick Stein’s Seafood Restaurant, Padstow

After an incredible foodie weekend in Wales, I spent just 4 days in London before getting on another train – this time to Cornwall. A place that I had previously associated only with Malory Towers, I now have new memories of fearsome waves, beautiful walks, and of course, incredible seafood.

This weekend was thanks to a lucky tweet last year, as I won a competition sponsored by Birchall Tea to promote South West Britain. It included accommodation, a day at the spa, and, most importantly, a meal at the Rick Stein Seafood Restaurant in Padstow. Now, I don’t often eat in very expensive restaurants for budgetary reasons, but when somebody else is footing the bill, I am always more than happy to oblige with my appetite! I had heard incredible things about Padstow, Rick Stein, and this particular restaurant, and couldn’t wait to try it for myself.

Cod bites as an amuse bouche, with gorgeous olives and crusty bread

It was pouring with rain when we arrived, but we quickly warmed up due to the fire in the entrance and the warm atmosphere, accentuated by beautiful art and numerous shelves of wine.

It took us a long time to choose our dishes, as we wanted to ensure we were making the most of the food, and would be able to eat as much variety as possible. We finally made our choices, and boy, did we choose well. Starting with the Beaumont des Crayéres champagne, which was absolutely stunning! I really need to stop drinking cheap Prosecco and hold out for this stuff…

The Octopus Carpaccio with Crispy Chipirones, Rocket Leaves and Red Pepper Dressing kicked off our meal, and it is safe to say these were the most thinly sliced tentacles I have ever seen. They called it red pepper dressing, but it felt like chorizo juice… salty, rich, and oily without being greasy. Topped with crispy chipirones, this dish was an absolute stunner.

Next up, the Black Risotto with Cornish Cuttlefish, which stained our mouths and warmed our hearts, with the little pieces of cuttlefish proving meatier than the bacon and sausages we had for breakfast the next morning. With a touch of lemon oil lining the sides of the plate (you can see it in the picture below if you look carefully!), we mopped up every spare drop with bread and only the rules of society stopped us from licking that plate clean.

And then the mains… 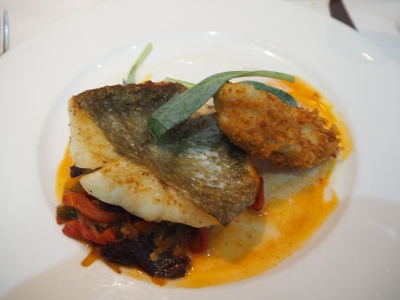 The most fascinating thing about this dish was the oyster leaves, which are literally leaves that taste like oysters. I still don’t understand it, and I’m not sure I ever will! The crispy oyster served alongside the fillet was crumbed to perfection, and incredibly rich inside. Although I wasn’t overly blown away by the piperade of roasted peppers, tomato and Cornish Dulse seaweed, the John Dory fillet made up for it by flaking apart at the lightest touch and melting in my mouth.

Crisp Skinned Fillet of Stone Bass with a Symphony of Alliums

This was the showstopper of the night. Although they had run out of stone bass, and replaced it with hake, the smoky leek puree was what did it for us, as we carefully portioned it so as not to gobble it all at once. I loved the sound of a symphony of alliums, and truly, they sang in perfect tune, with the charred spring onion and chive oil perfectly complementing the soft flesh of the hake.

We opted for both thick and thin cut chips to compare and contrast – the verdict was that both were probably triple cooked, and definitely in our top three chip experiences. 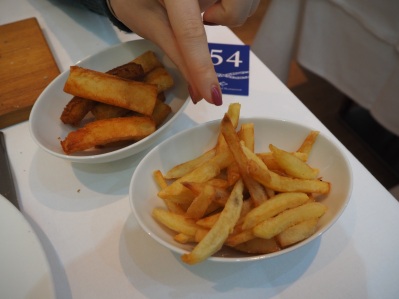 At this point, we were both two glasses of champagne in, but it would have been a crime not to order dessert. Again, we deliberated, hummed, and hawed, but decided upon the Hot Chocolate Fondant with Toasted Marshmallow Ice Cream and Raspberry. I’ve had a soft spot for fondant ever since my experience at Galvin at Windows recently, and this one surpassed it by revealing marshmallow inside the fondant itself, with chocolate soil lining the ice cream. Absolutely heavenly! 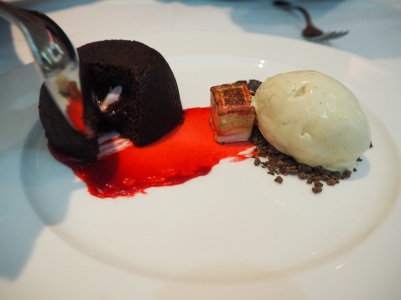 Throughout the evening, the service we received was just wonderful. We were acutely aware of having left the big smoke behind, as the local Cornish people welcomed us with a genuine friendliness that is often hard to find in London, particularly at expensive restaurants. We were the last people left around 11pm, but at no point did we ever feel rushed, and the staff was more than happy for me to snap a few more pictures of the interior!

The Seafood Restaurant is surely one of the most expensive establishments I’ve ever visited, with the mains costing an average of £30. I’m not sure I could afford it on my own, but I will forever be thankful to Birchall Tea for allowing me to experience this incredible meal. And one of the best things was that we left Cornwall guilt-free, having walked off all the food on a 3-hour coastal walk the next day!

Accommodation at the Trevose Club, dinner at The Seafood Restaurant, and the Bedruthan spa were all sponsored by Birchall Tea, but as always, all views are my own!

3 thoughts on “An escape to Cornwall, and a review of Rick Stein’s Seafood Restaurant, Padstow”