Summer in Munich is absolutely delightful. I cycle everywhere, wake up with the sun and, like all other Germans, spend most of my time just chilling out in one of the many beer gardens. Any restaurant worth its salt has one of these outdoor areas, and litres of beer flow freely and generously. The sun doesn’t set until around 10pm, and even then, it is still warm enough to enjoy the outdoors. I adore this lifestyle, and last week, I added yet another beer garden to my ever-expanding list: Kaisergarten.

The other Austrian restaurant I have visited recently was Österia, where I was highly impressed with the quality of food and slightly hipster atmosphere. At Kaisergarten, the ambience was far more relaxed, as we sat outside, squeezed onto a table with 6 other people. I went with a friend who had already told me what to order before we even arrived, so I didn’t hesitate to request the traditional Wienerschnitzel and the Kaiserschmarrn for dessert (it takes 45 minutes to make, so they advise you to order it at the start).

As dusk set in, the Schnitzel arrived with a generous helping of potatoes, a salad on the side and two little pots of cranberry jelly and horseradish cream. I am not usually a fan of mixing sweet and savoury, but this jelly, spread lightly on the Schnitzel, was the perfect balance of tart and crunch. And whilst I thought the Schnitzel at Österia was of higher calibre, the salad at Kaisergarten beat the other hands down.

Then, the Kaiserschmarrn. For those of you who don’t know, it is a traditional Austrian dessert that never tastes the same in any two locations. Kaisergarten‘s Kaiserschmarrn blew me away. We ordered the portion for two to share, but we really should have just ordered one, especially after devouring a Schnitzel each. Having said that, we nearly finished the larger portion, because it was just so darn good. If I were to describe it, I would compare it to a giant fluffy pancake, shredded into large pieces, doused in icing sugar, flavoured with almonds, with a slightly sticky quality to it, complemented with pickled plums and apple sauce. It was a shredded fluffy piece of heaven.

The prices at Kaisergarten are not modest, so if you are on a budget, it is not ideal, but my tip is as follows: Eat at home and then head to the beer garden for dessert 🙂 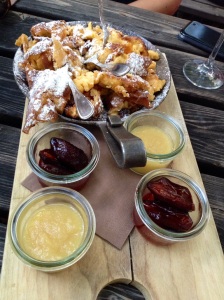