The Royal Oak – gastropubbing in Twickenham

London. Crazy, massive London. It has endless boroughs, nooks, and crannies, and it’s impossible to even attempt to explore them all. Time and convenience often trump my adventurous spirit, but I recently ventured north to Totteridge & Whetstone and discovered a wonderful Indian establishment, Bayleaf, which in turn inspired me to go all the way south-west, to Twickenham, and have a very different type of meal at an acclaimed gastropub, The Royal Oak. 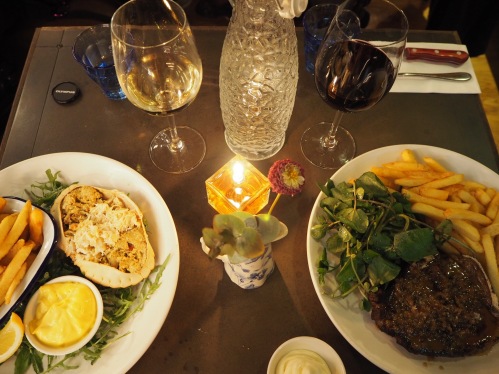 The gastropub is a relatively new phenomenon, as pubs were historically considered drinking establishments, with food as an afterthought (apart from a cold ploughman’s lunch, perhaps). Since the 90s though, so-called gastropubs have sprung up all over the world, especially London, and whilst they normally serve comforting (read: starchy) British food, there are some that do focus on quality grub, including The Royal Oak.

Situated opposite the beautiful York House and Gardens, The Royal Oak is newly re-opened and boasts a lovely outdoor area. However, as autumn is now well and truly upon us, I made my way indoors and was comforted by the warmth.

The Royal Oak has a definite pub feel, but it feels classy in its grittiness, with muted colours, a smooth wooden bar and polished (yet rustic) tables. Then… I spotted some decorative classic ‘old books’. Now, as a literature graduate, I feel extraordinarily protective of the written word. In fact, I remember getting very angry at a certain pub in Munich, where they had actually stuck their old books together with superglue, making it impossible to peruse them! But after a quick peek (and feel), I was happy to discover that The Royal Oak treated them with the respect they deserve, and so I breathed easy once more. Take that, Kennedy’s. 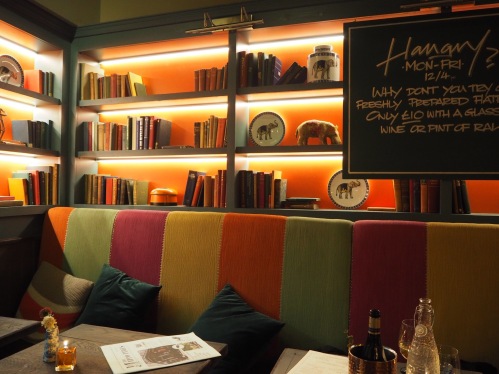 My friend arrived after a slight fail in navigating the London transport system (absent-mindedly getting off at the wrong station was simply one part of her journey), upon which we studied and were impressed by the wine list (especially considering pubs normally focus more on beer). We chose the Chablis Premier, which, though it could have been slightly more chilled, had a lovely fruity flavour, and my friend also had a beautiful glass of Montepulciano with her steak.

As I’m not eating meat this month, I focused on the fish, and started off with the gin smoked salmon. It arrived in generous slices, with just the right amount of mustard on top, smatterings of fresh dill, and crispy toast. What a refreshing change from the terrible salmon I had at Four to Eight recently…!

My friend went for the chicken livers, generously heaped on bread, with rich autumn colours and flavours.

I then opted for the dressed crab, and was a little surprised when it arrived cold. I then realised that this is what dressed crab is; it’s just that my personal crab preferences are hot, shredded, and covered in chili and garlic! Nonetheless, the sea creature was definitely very good quality, and I loved the presentation within its shell. And the chips (always the test of a good establishment) were delightfully hot and crispy, complemented with the subtle saffron aioli. 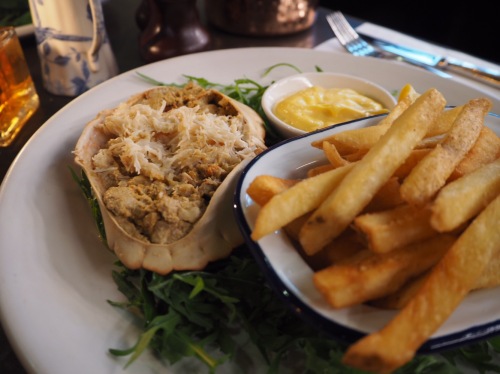 I can’t vouch for the steak, but my friend devoured it, praised its juiciness, flavour, and peppercorn sauce, and also proclaimed her affinity for the gloriously crispy chips!

As soon as I glanced at the dessert menu, there was no doubt in my mind as to which one I wanted. Of course it was the chocolate and hazelnut brownie, which was excellently moist and had a lovely dollop of vanilla ice cream on top. The portion was insanely generous though, and to my dismay, I was unable to finish it (this is a rare occurrence indeed)! Served with some Birchall tea (I have a soft spot for them due to a trip to Cornwall last year), it was a wonderful way to finish the evening, and so we waddled back out into the crisp night air.

In London, there’s such a focus on fancy, international, and exotic food, but sometimes, all you want is a comforting plate in a cosy atmosphere. And on this, The Royal Oak delivers. I’d love to come by another night and experience one of their many activities (live music and swing dancing, to name but a few) – it’s definitely worth venturing out of Zone 1 for!

I was a guest at The Royal Oak, but as always, all views are my own.

One thought on “The Royal Oak – gastropubbing in Twickenham”