Breakfast at Jackson + Rye: Skip the eggs (and the breakfast)

My birthday was nearly a month ago now, but a couple of my friends very kindly took me out for breakfast this week as we weren’t able to fit it in before Christmas. What a nice way of stretching out celebrations! We hummed and hawed but finally decided on Jackson + Rye in Soho, as we had heard so many good things about it.

Unfortunately, we were rather disappointed.

The three of us each ordered a different egg dish, as they sounded incredibly tasty: Avocado Benedict, Avocado Royale, and simple poached eggs on toast.

Where to begin? The eggs were cold, the avocado looked bruised and blackened, there was only one piece of toast for two avocado halves and eggs, and my Avocado Benedict had just one thin, measly strip of bacon in the middle. 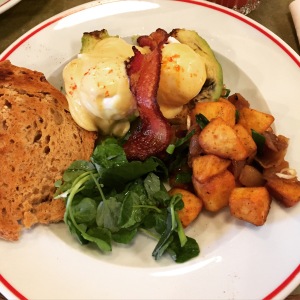 The potatoes on the side were nice, but the caramelised onions didn’t match, and the salad was superfluous. All in all, we felt extremely let down by the egg dishes.

The saving grace was the pancakes – we ordered the blueberry and cream ones for all of us to share, and they were delightful. Wonderfully fluffy, with the perfect combination of sweet and savoury, I wish I had only ordered these. Having said that, one tiny cup of blueberry compote and cream just isn’t quite enough for three large, fluffy pancakes!

I will admit that we should have complained about the eggs earlier, as the service was very apologetic and insisted they would have replaced them. In the end, the poached eggs with toast were taken off the bill, which we did appreciate. Our waitress also explained that the avocado was black because it’s slightly roasted – but I still maintain it was simply bruised.

Even the drinks were a letdown, as the pomegranate, orange, and grapefruit juice was good, but didn’t feel fresh at all. All in all, we were very disappointed by the food at Jackson + Rye, which is a pity, as I’d heard so many good things about it. And whilst their social media team was very responsive afterwards, claiming they would have replaced things and explaining that this is just how their dishes are structured, I still won’t be going back. There are too many other good brunch places in London, some that I’ve tried and loved (Dishoom), as well as many that are still on the wishlist (Duck & Waffle, Jago, Ottolenghi, and more). And for our next celebration (birthday or otherwise), that’s where we’ll be heading!

4 thoughts on “Breakfast at Jackson + Rye: Skip the eggs (and the breakfast)”