My favourite view of London is the one from Primrose Hill, above Regents Park, where I can sit right on top and feel like the kingdom of London is at my feet. Last week, after dining at the illustrious Sushisamba on the 38th floor of the Heron Tower, this opinion has not changed. But let’s just say that Primrose Hill didn’t serve melt-in-the-mouth tuna belly sashimi, and my ears certainly didn’t pop on the way up…

Let me preface this review with the disclaimer that I did not, and could not have, paid for the meal myself. The prices at Sushisamba are nothing short of extortionate, but this is clear when observing the clientele, as the place was swarming with suited and booted city types who are not averse to splashing the cash.

I was lucky enough to be invited through work, and as we were a party of seven, we split and shared all of the dishes, which I love! This meant I was able to get a taste of nearly everything on the menu, apart from the 1kg of Kobe beef, priced at a modest £1000. Maybe next time…?

The cocktails up on high were some of the best I’ve ever had, and generous to boot. My ‘Shiso Fine’ was the perfect mix of sweet and light, which is just how I like it, and I may have ordered two more of them throughout our visit (which, to be fair, lasted around 5 hours!).

Although Sushisamba markets itself as Japanese-Brazilian fusion, it could have passed for just Japanese, as there was far more Asian cuisine on the menu, and I for one thought the Asian flavours surpassed the South American ones, particularly with the sushi and sashimi.

Along with the standard Japanese starter of edamame, which was underwhelming, we also ordered the green bean tempura with truffle mayonnaise – an incredibly simple dish, but one of my favourites of the night. The batter was feathery light and the truffle flavour was the perfect complement! 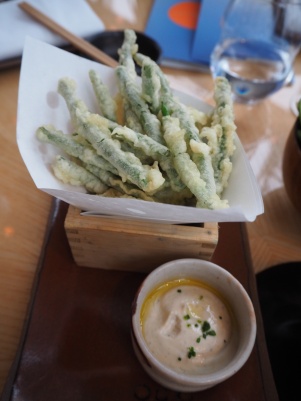 We then opted for two different types of taquitos: lobster and yellowtail. The presentation was gorgeous, but the taste ordinary, with the garnish of onion and lime slightly overwhelming the fish.

The ceviche we ordered was underwhelming, and I preferred what I had eaten at Señor Ceviche a few days previously. However, the Wagyu beef gyoza was outstanding, although I couldn’t discern the superior quality of the beef through all the other flavours. They were perfectly done and not at all doughy, a quality that is often difficult to find in gyoza!

The salt and pepper squid was quite simply heavenly, and definitely the best I’ve ever had, with not the slightest hint of “rubberiness” in the fish. 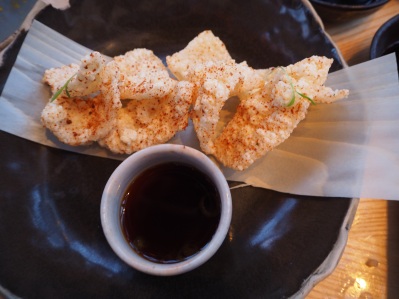 The pork belly was absolutely delicious, with stunning colours (#nofilter down below!) and meat that fell apart as soon as I touched it. I was salivating so much that I barely adhered to decorum before grabbing the last one!

The tempura shrimp was mildly sweet with the mayo dressing, but nothing special and definitely missable.

But then came the samba rolls. Oh my. I decided a few years ago that rolls are nearly always preferable to nigiri, because of the multitude of flavours, and these were surely some of the best I’ve ever had. We ordered the tiger maki and the Sao Paolo, and if I ever do come back, I will order only these. 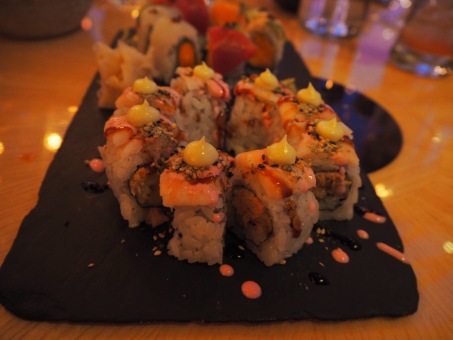 The sashimi, as I mentioned, was simply to die for. The most tender and high-quality fish, arranged beautifully, melted in my mouth and dripped down my throat. The tuna belly (toro), which I first discovered at Kiku earlier this year, was the winner of the afternoon, but a close second was the eel (unagi) and butterfish – the last of which I had never even seen before, but which simply oozed deliciousness. The scallop, octopus, and yellowtail were outstanding, but didn’t even come close to the other three.

Towards the end of our predominantly pescatarian meal, one of my colleagues had a bit of a meat craving so we spontaneously ordered the churrasco platter to finish off. All the meat was phenomenal, and the multitude of sides seemed unnecessary due to the quality of the cuts.

I thought we were done, but then the dessert menu arrived… and… well, it would have been rude not to. I adored ‘With Love From Rio’, with crunchy nuts and smooth chocolate mousse, but the ‘Organic Red Chocolate Chili Peppers’ was a bit too spicy, and the chocolate banana cake felt quite ordinary.

Was the food amazing? Yes, but not significantly better than Matsuri, which is far more reasonable.

Was the view amazing? Ye-es, though there are better ones

Will I come back? Probably not. I have since tried Duck & Waffle, two floors up in the same building and far preferable, but it would take a strong reason (and somebody else’s paycheck) for me to come back. Sushisamba was a fantastic experience, and I will remember it for a long time, but I am content with revelling in the memories of that green bean tempura and the buttery, buttery tuna belly!

← Impressions of Machneyehuda market, Jerusalem
Breakfast at Jackson + Rye: Skip the eggs (and the breakfast) →