The centerpiece, the crème de la crème, the reason this dinner party came about… The Duck. Provided by Gressingham Duck and prepared by the Swindian, it was truly a masterpiece. The best thing about Gressingham is that they kindly remove the giblets from the bird and keep them in a sealed packet inside, so I didn’t have to get my hands dirty. I then used them to make the gravy (see here).

I was quite nervous about roasting this bird, as I had never roasted one before. However, I researched at least 20 different recipes online and in the end, I opted for quite a simple mode of preparation, which anybody can copy. This way, the flavour of the meat could really shine through, and the pairing with the sumptuous red wine gravy and roast vegetables, drenched in the copious duck fat, was perfect.

Yes, the duck fat. If you are averse to fat and oil, don’t make duck. This bird leaks fat as it cooks, and it is the most glorious thing to observe. I used the fat to roast the vegetables, and also added it to the gravy. In comparison to chicken, the fatty layer on top of the duck is far thicker, and so it’s important to score it with a sharp knife before roasting and rub it all over with salt, as this will make it crispy and delicious.

Pre-heat the oven to 200 degrees Celsius.

Take the duck out of the packaging and remove the bag of giblets inside. Keep aside to make stock (instructions here). Place the duck in a deep roasting tin.

With a very sharp knife, score a diamond pattern into the duck skin on the breast. Be careful to cut only the skin, not the meat (as you can see in the photo above, my cutting was slightly inaccurate on top, but luckily, this didn’t affect it too much). This will ensure the crispness. Turn the duck over and do the same on the bottom.

Rub the whole duck, top and bottom, generously with the sel gris and then fill the cavities with the garlic, rosemary and thyme. 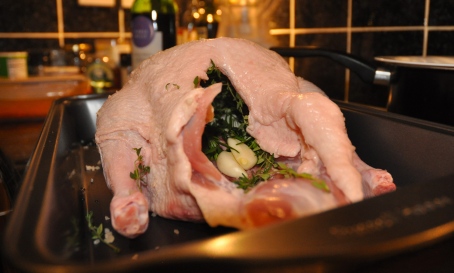 Place the duck in the pre-heated oven. After 45 minutes, remove and spoon some of the fat off to use for the gravy. With a spoon, gather up some more of the fat and drizzle it over the top. Turn the duck over and place back into the oven (this is so it can get crispy on all sides). 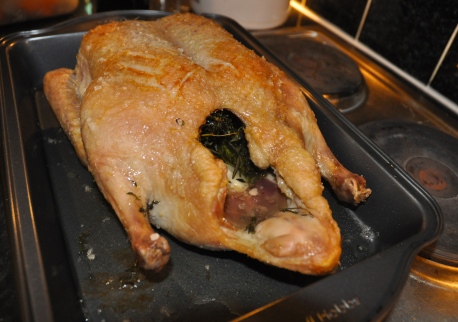 After 45 minutes, remove the tray, turn the duck right-side up and put the cut vegetables all around the duck, where there should be a load of fat. Sprinkle some salt and fresh rosemary and thyme (taken off the sprigs) on the veggies and place back in the oven.

Let the duck crisp in the oven for another hour with the vegetables roasting alongside. Then remove the duck and let it rest. Leave the veggies in the roasting tin but remove most of the fat and keep aside in a bowl or jar – this can be used at a later point or added to the gravy (do NOT throw it out – you’ll regret it).

Roast the veggies for another 20 minutes until they are fully cooked and slightly crisp.

Then carve the duck (it’s important to let it rest first) and serve with the veggies, red wine gravy and garlic green beans.

This was my first time carving a bird, too… I had lots of help after I made the first (slightly unsuccesful) cut!

Duck, gravy, roast veggies, garlic beans and a bit of bread… aka heaven.

Then lie back on the couch and take a little nap before indulging in cake!

Thank you to Gressingham Duck for not only providing me with a magnificent bird, but also delivering it straight to my home. This adventure has shown me that duck isn’t as intimidating as I previously imagined – it simply requires patience. The hardest part was the carving, but I guess I’ll just have to roast another duck so I can practice… how unfortunate.

← My 25th birthday, plus a review of brunch at Imagine in Zurich and a bacon risotto
Simple green salad with walnut and avocado, doused in mustard vinaigrette →