The Real Greek – lunching in Marylebone

Being back in London has been tiring so far, as moving always saps a lot of my energy. Between unpacking, organising and arranging the flat, it’s been an absolute whirlwind. Yesterday I decided to take a break from it all with a couple of friends and wandered around Marylebone in search of a nice, inexpensive lunch. We’d visited Cocomomo recently, and right opposite it we found The Real Greek, a lovely, friendly restaurant very close to Baker Street. 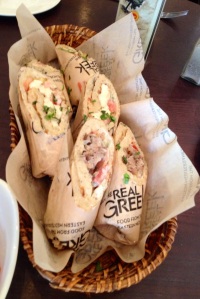 After perusing the menu for a good while, we opted to share the Souvlaki platter for two amongst the three of us, with the addition of hummus (I can never resist that chickpea glory if it’s on the menu!). The hummus came served with flatbread, and what flatbread! I’ve never tasted anything like it, as it was fried, oily, and delicious and very different from pita bread. The hummus was rather chunky, with an added lemony zing – not the best I’ve had, but still pretty good. 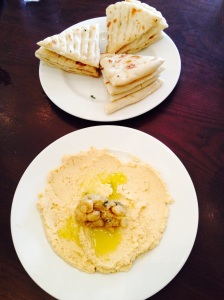 The platter consisted of three wraps, each cut in half: chicken, lamb and halloumi. We could choose any two sides, so we opted for saffron rice and couscous salad, both of which were delivious. Having said that, we didn’t actually need the sides, as the wraps were made with the same flatbread and rather filling. The halloumi and lamb wraps were absolutely outstanding, but unfortunately, the chicken in the last wrap was a little tasteless. The only caveat was that the paper wrapped around the wraps was a little fiddly to get off and we ended up making quite a mess! 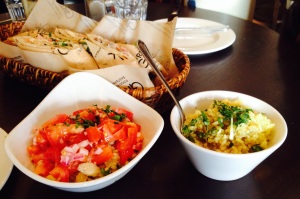 The prices were very reasonable (it was easily enough for food for the three of us), as we paid 10£ each and were adequately full of deliciousness afterwards. The service was attentive and friendly, and we will definitely be going back very soon!

2 thoughts on “The Real Greek – lunching in Marylebone”