My first foray into solo dining was in 2016, when I did four restaurants in four days before leaving for my backpacking trip around South America. I really enjoyed it, but haven’t done it too much since, apart from a slightly disappointing visit to Yosma last year.

And so, when I had a conference in Soho that conveniently allowed for a 1-hour lunch break, I decided to visit one of the many restaurants that has stayed stubbornly on my list for many months: Xu. From the same team that brought us Bao (which incidentally was a part of my solo dining week 2016), Xu focuses on Taiwanese cuisine, and is located on the edge of Chinatown, right next to Palomar, one of my absolute favourite places in London.

In a way, Xu is definitely set up for solo dining, as they even have a couple of single-diner tables to avoid awkwardness (I chose to sit at the bar instead). But in another way, they’re really not, as most of their dishes are made for sharing, as well as the tea, which comes in a quantity large enough for two.

I wasn’t hugely hungry, so I took a bit of advice from my waiter, and ordered two types of dumplings, as well as the lard fried rice, which I knew I had to have after reading Cake + Whisky’s review a couple of weeks earlier. I liked that he recommended a tea to go with the dishes I’d chosen, and what I particularly appreciated was that he recommended tea before alcohol! The recommended Oolong was presented in a gorgeous ceremonial fashion, with the first brew in the pot, an additional thermos of hot water, a little jug and a teeny tiny cup. I was then told I could do two extra brews throughout the meal, but I would need to let it brew for precisely 1 minute and 50 seconds – no more, no less.

They sure don’t mess around.

My first dish, the mixed mushroom dumplings in Sichuan chilli oil, was spicy enough to leave a little tingle on my tongue, but unfortunately, the sauce it came in was a little too vinegary for my liking. The mushrooms were tender and perfectly cooked within the casing, but I did feel that £9 for a set of five vegetarian dumplings was quite pricey. 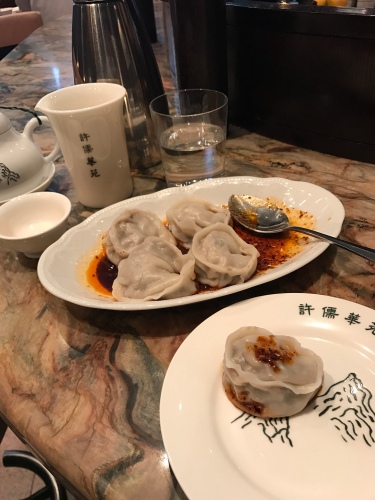 Next up was the pork buns, which were slightly messy and exploded upon first bite. Whilst tasty, they didn’t completely win me over, as I ended up eating the filling and the pastry separately, and the whole affair felt a bit oily. Was the casing too thick? Did I eat it wrong? 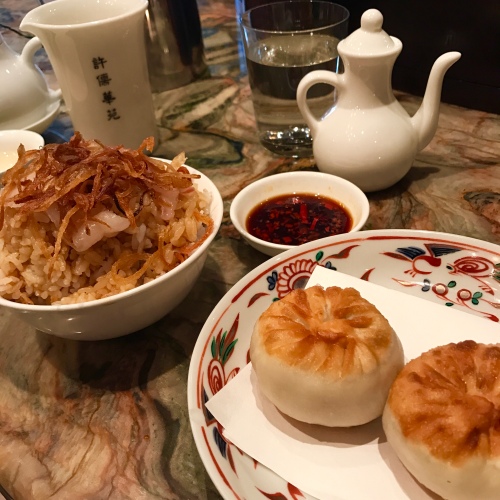 After two slightly disappointing dishes, it was the supposed side dish, the lard fried rice, that won me over. Topped with crispy shallots, glistening with lardicious lardiness, the depth of flavour (ahem, fat) made it comforting and rich, and I spooned up every last grain of it. I actually only realised about halfway that there was a bit of sauce on the bottom, so when you order this (and you definitely should) make sure you mix it up from the start.

Overall, my experience at Xu was a bit hit and miss. I adored the rice, but was slightly disappointed by the dumplings. However, the service was excellent throughout, and unlike most other popular and trendy places in Central London, they actually accept reservations, so I would like to do just that next time. I would also go back in the evening (as the lunch menu is shorter than the dinner one), accompanied by a few people so I can try more dishes (particularly the suckling pig) and experience it to the fullest. It will also make the whole thing more economical, as I felt a slight pang in my wallet at paying the aforementioned £9 for mushroom dumplings, as well as another £9 for the tea (which, all things aside, was absolutely stunning)!

← Harringay Arms – cosy pub and gorgeous pizzas in North London
Getting out of London: The Royal Oak Swallowcliffe, Tisbury →

4 thoughts on “Rediscovering solo dining at Xu in Chinatown”