I’ve been on a slight hiatus from blogging lately, not because I haven’t been cooking and eating, but more because other things in my life have kept me too busy to sit down and write properly! So for my ‘comeback post’, I’d like to tell you all about this great pub/pizza place/craft beer locale I went to last month; a lovely place called the Harringay Arms in Crouch End (N1).

There aren’t usually many reasons for me to venture further North than Camden, but ever since visiting Bayleaf, an incredible Indian establishment in Totteridge & Whetstone (tee hee), I’ve opened my mind to the idea of great food outside Zone 1 – and Harringay Arms definitely added to this. It’s recently re-opened, but in spite of that, it has kept a largely traditional look and feel, with a cosy, slightly tongue-in-cheek interior (we were there on February 13th and hugely enjoyed the ‘Love is dead’ theme). The pub is rife with chalkboards and exposed brick, without coming across as pretentious (unfortunately, there are all too many occasions where the hipsters have embraced this decor too much and taken it too far).

Throughout the evening, I felt very well taken care of, which isn’t a common occurrence in a pub, as you’re usually left to your own devices, venturing to the bar only when you really need something. The manager at Harringay Arms was very friendly and hugely knowledgeable about their craft beers, suggesting which ones would go best with our food, and even proactively coming back before the mains to change my friend’s order, as he felt that the previously recommended stout would have been too heavy with her choice of meat pizza. He was right, and he earned bonus points for recommending the best beer name ever – Gigglemug! On an unrelated note, we also made/tried to make some zombie origami later on…

The menu at Harringay Arms was small, but on point – we chose two different garlic breads to start, which were more like flatbreads, with a lovely crunch. I loved the sweetness of the buongusto onions on the mozzarella version, and the Nduja one was gorgeously spicy. I could have eaten ten more! 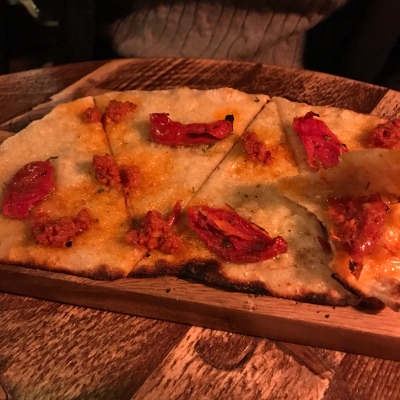 As for the pizzas, I opted for a slightly unconventional salmon number, with a poached egg on top, lemon oil, and a béchamel instead of tomato base. The poached egg was a wee bit overdone, but other than that, I absolutely loved it, and it played well to my tomato sensitivities (I’m trying, but still haven’t managed to overcome these!). I could taste the lemon oil through and through, and the salmon was definitely not your average supermarket stuff. 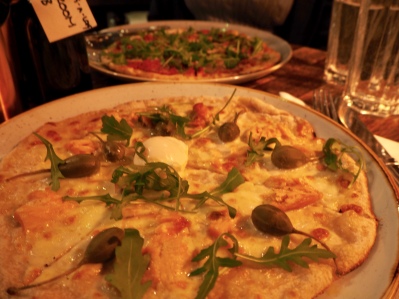 Too excited to eat it to focus the camera…

My friend’s meat pizza was fantastic too, and although it had a healthy helping of Gorgonzola, it wasn’t overpowering, and of course it was perfectly paired with the aforementioned Gigglemug! 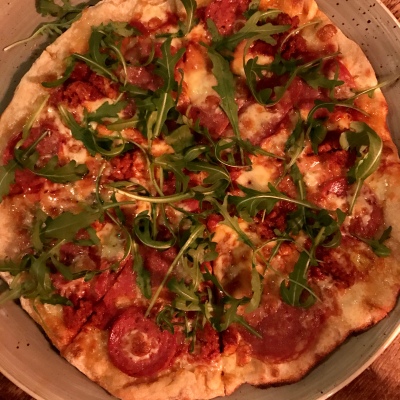 We then decided to indulge in dessert (who says love is dead?), and so we shared the brownie and ice cream to finish off a decadent meal. And boy, was this the right decision.

With various gastropubs I’ve visited recently (including The Royal Oak and The Grafton), dessert has been good, but never as good as in a ‘proper’ restaurant. But Harringay Arms delivered. A perfect brownie, with stunningly flavourful gelato on top, we spooned out every last drop and had to stop each other from licking the bowl! 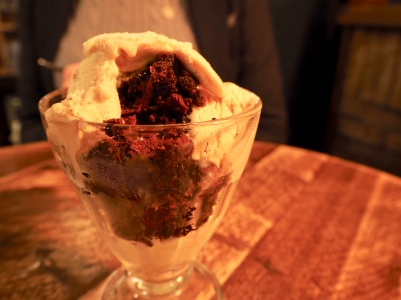 In terms of atmosphere, the pub itself was pretty cosy, and it filled up as the evening went on. However, we noticed that we were actually almost the only ones eating. Maybe this is because the Harringay Arms’ food reputation has quite taken off yet? I do hope it does – that hot smoked salmon pizza alone could convince people, and that brownie to finish things off is an absolute winner. The prices are decent, the beer is local, and you can learn about zombie origami. What’s not to love?! 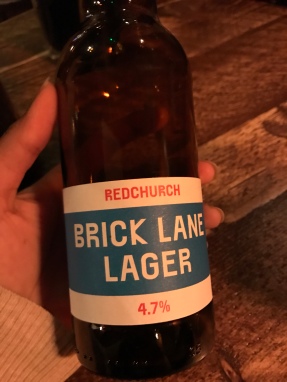 I was a guest at Harringay Arms, but as always, all opinions are my own.