I absolutely love cooking classes, and even before my South American adventure began, I knew I wanted to attend some out here, particularly in Peru, which is commonly known as having the best food on the continent. This is also evidenced by the number of restaurants it has in Latin America’s Top 50 restaurants, of which we were lucky enough to visit two (check out the review of Malabar here, with the one on Astrid y Gaston to follow soon!). 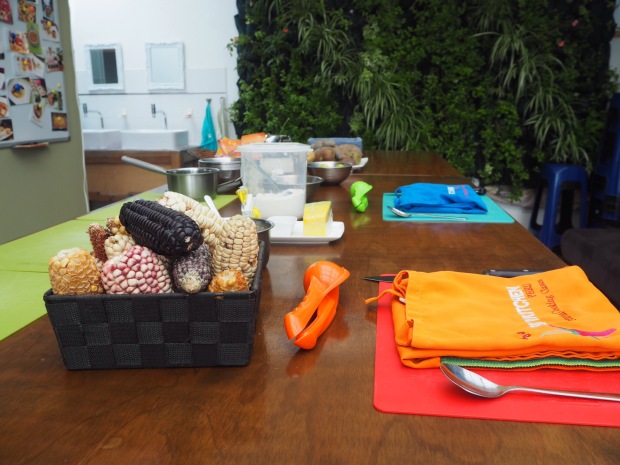 After a bit of research, I chose to spend an afternoon with Sky Kitchen, a cooking school in Lima, located in the hipster neighbourhood of Miraflores, which is filled with a variety of bars, restaurants, and hostels. The class itself is held on the terrace of a penthouse apartment with a beautiful view of the Lima skyline, which made for a lovely ambience. The name all made sense when I came in, as we even caught the sunset during the class! 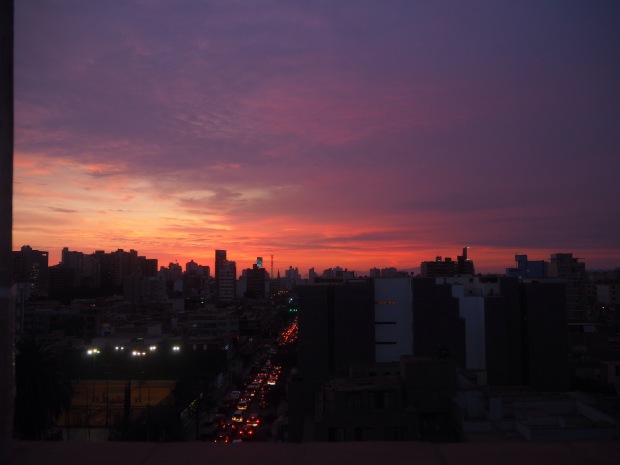 The class was run by Diana, a lovely young Peruvian lady who seriously knew her stuff about her country and its cuisine. She not only taught us how to make the dishes, but also explained their history and origins, which I loved. For example, our first dish, the causa, used to be given to men by their wives before they headed off the war, para la causa – for the cause. Hence the name! 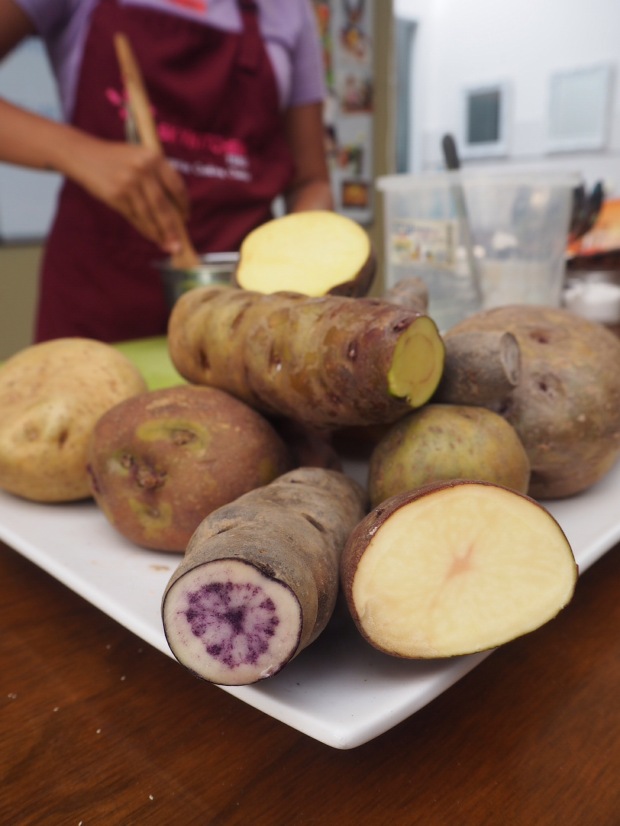 A few of Peru’s 8’000 different types of potatoes!

With Sky Kitchen, we cooked a four course meal, and ate one course after the other as soon as it was ready. This was in contrast to other cooking classes I’ve taken, but it made sense as the dishes need to be eaten absolutely fresh – especially the ceviche! 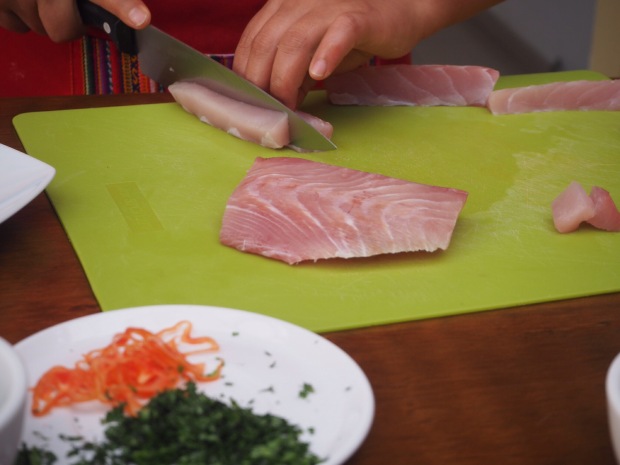 Starting off with the causa, we made a very different kind of mashed potato than what I’m used to. With just a bit of oil and chilli sauce made of the ever present aji amarillo, it was combined with avocado and chicken mayonnaise to form a tower. I liked the look of it and the flavours, but it was a bit too stodgy for my liking due to the amount of potato. I’m sure it would be extremely comforting if I were going off to war, though! 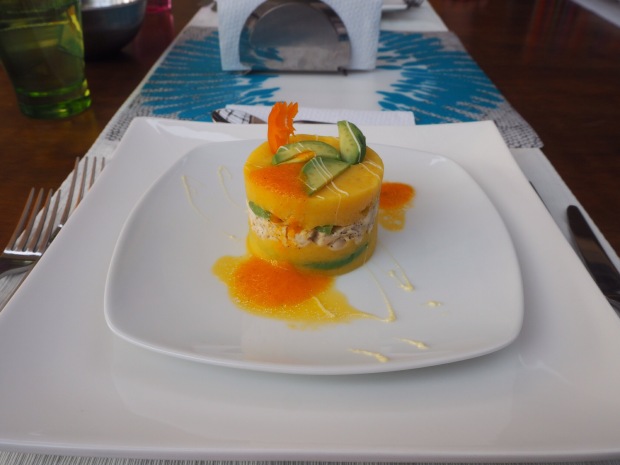 Next up, my favourite Peruvian staple: ceviche. It was fascinating to learn how simple it is to make the classic version – you just need some incredibly fresh fish, lots of lemon, and a few more ingredients. Diana told us all the little tricks, like straining the lemon juice to make a clear leche de tigre, washing the onions to make them less pungent, and most importantly, eating the ceviche within 15 minutes of making it, else the fish will overcook. My favourite line was when we added the dressing… ‘Stir it with love – you don’t want the fish to die a second death!’ 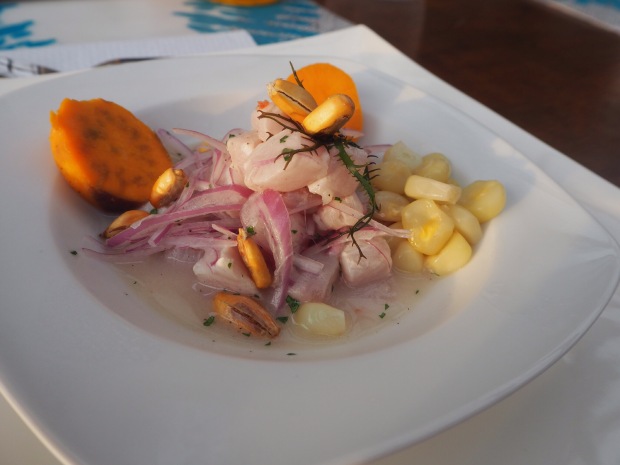 As mentioned, Diana was very good at explaining the history of Peruvian cuisine, especially the Chinese influence, which I was unaware off. Apparently, about 10,000 Chinese men came to Peru after slavery was outlawed, and so they mixed and mingled with the Peruvians, as well as introducing various aspects of their cuisine. So when you see a restaurant with Chifa written on it (we saw so many of these), that means Chinese cuisine with Peruvian ingredients! With this in mind, we made our main course, the lomo saltado, which was a variation on a stir-fry, with a few twists coming from Spanish and Italian influences too. As with most Peruvian and Bolivian main dishes, we had two types of carbs to go with it: rice and potatoes! 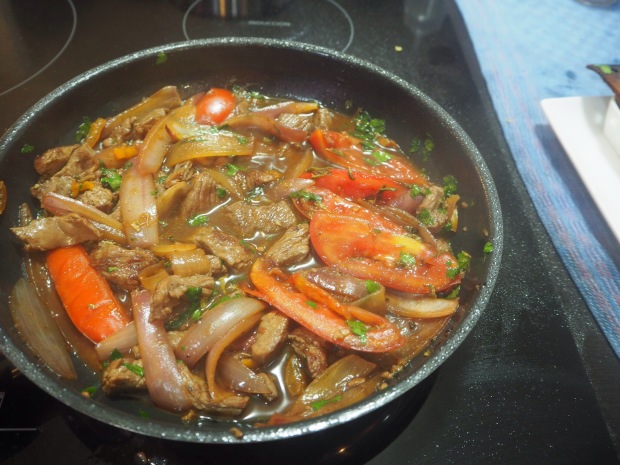 And finally, the dessert. Picarones weren’t something I’d seen before, and they were unlike anything I’d ever made, too. Have you ever mashed up pumpkin and sweet potato, mixed it with anis and deep-fried it as a dessert? I didn’t think so. The batter was oddly sticky, and we all had fun trying to make the round doughnut-style shapes before dropping it into hot oil (mine were ridiculously deformed)! Drizzled with molasses, the picarones weren’t too sweet, but lovely and crunchy, and a very unique way to end our meal. Diana made us eat them standing up, as they’re most often eaten from street stalls, and it sure felt a lot more authentic that way! 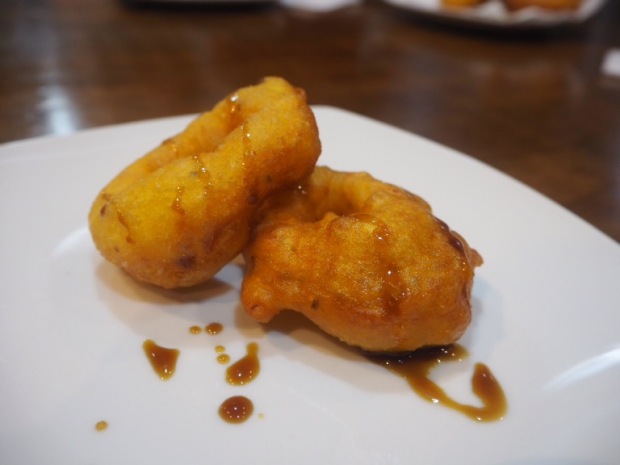 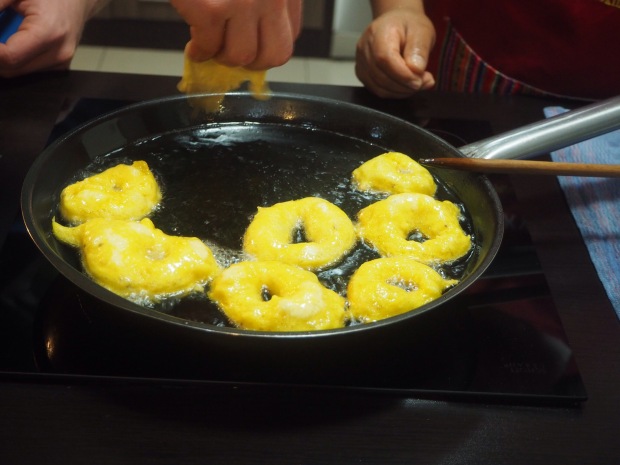 I loved my experience at Sky Kitchen, as it was not just a cooking class, but an insight into Peruvian cuisine and culture as a whole. In addition, as both of us taking the class spoke Spanish, Diana even made it a bit of a language class, too! I’d highly recommend paying them a visit if you’re in Lima – it’s a great way to spend an afternoon. Just make sure you don’t eat lunch beforehand! 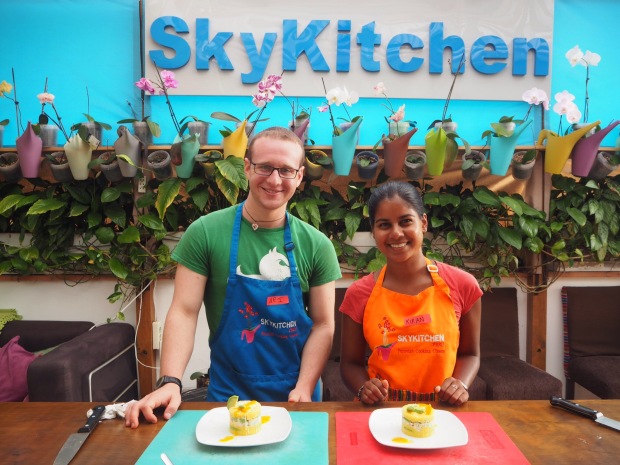 I was a guest at Sky Kitchen, but as always, all opinions are my own.

3 thoughts on “Peruvian Classics with Sky Kitchen – a cooking class in Lima, Peru”