Sticks’n’Sushi – stick to the sushi

I absolutely love sushi, and Sticks’n’Sushi, true to its name, satisfied all my cravings. The decor throughout is very minimalist, but the flawless, aesthetically pleasing presentation of the food makes up for it. I had checked out the menu in advance (of course), and once inside I faced the same issue as I had online: it is ridiculously long. It made my head spin, as I simply wanted to order everything! Luckily, a couple of my colleagues had been before, and so they were able to recommend their favourite dishes.

As with most Asian restaurants in London (Bibigo, Ping Pong, etc), the cocktails were absolutely outstanding. Not too strong and refreshingly delicious, we all loved our choices (mine was Nippon, an elderflower-Prosecco mix with a twist). The rosé wine that my colleagues chose as a follow-up was a little doubtful at first, but improved significantly once combined with the food!

We opted for a variety of starters to share – my favourite was probably the soft shell crab, but they were all delicious in one way or the other!

I’m not usually a huge fan of cauliflower, but the fried cauliflower at Sticks’n’Sushi, as well as the cauliflower steak at The Palomar, are making me reconsider my choices. The gentle breading wasn’t too overpowering, and the black sesame truffle drizzle was very pleasing to my palate!

The soft shell crab rice paper rolls were delicious beyond belief, and the slightly vinegary soy sauce that came with them was the perfect condiment.

The mixed sashimi blew me away – I normally shy away from sashimi as it can often lack flavour, but these fish pieces were perfectly tender and melted in my mouth. I don’t think I’ve ever had hamachi before, but it was definitely the favourite, particularly when dipped in the ‘supreme soy’!

The ebi bites came highly recommended, and I enjoyed them, but felt they were rather more bite than ebi, with an overly crunchy shell. 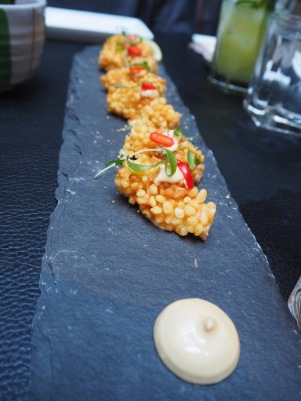 The kimchi and spicy edamame are classic favourites, and they both delivered, with the kimchi being a lot better than others I’ve had at Korean restaurants! 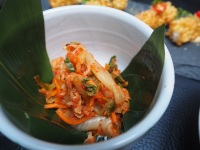 After these amazing starters, we then ordered some.. yep, you guessed it, sticks’n’sushi. We mixed and matched the sticks, and rather than choosing the prepared sushi platters, we chose our three favourite rolls from the list: spicy tuna, rainbow roll, and then the slightly controversial black cod dragon roll.

In terms of sticks, both scallop versions (teriyaki / wrapped in bacon) were outstanding, but the tuna was quite average, and the duck was just… fried duck. Next time, I plan to save the calories for the sushi. Speaking of…

The rainbow roll, with ‘everything on top’, as our waitress declared, was magnificent, with each piece of fish melting in the mouth.

The spicy tuna was good, albeit not that spicy, but the crowning glory was the black cod dragon roll. We called it a ‘controversial choice’, but it was one of the best sushi rolls I’ve ever eaten. With a dollop of cream cheese in the middle and the unusual addition of pumpkin seeds on top, the miso marinated cod still shone through and was a beautiful combination with the perfectly ripe avocado. I would have been happy to eat only this for the entire meal!

And then, just as we thought we were done, we realised that we could still have dessert. Now, I normally skip dessert, particularly at Asian restaurants, as they’re often not quite to my taste. But… oh my Lord.

My favourite thing about these was how bite-sized they were – they were so easy to manage, even after the huge meal we had eaten. The white coffee crème brûlée was outstanding, but I was over the moon at my choice – the Marcel chocolate cake with crystallised white chocolate. Slightly mousse-y but not too dense, with the crunchy white chocolate crystals… it blew me away.

Sticks’n’Sushi has four more branches, in Wimbledon, Greenwich, and Canary Wharf, and I would highly recommend a visit to whichever one is closest to you. But my advice is: Skip the sticks, and stick to the sushi.

3 thoughts on “Sticks’n’Sushi – stick to the sushi”