London’s restaurant scene is amazing, but also baffling. There are pop-ups that sell fried crickets, dinners served atop cranes, and that’s before we even get to the phenomenon of establishments that focus their entire menu around one ingredient or idea.

La Polenteria has polenta at the heart of 95% of their dishes. Baked, fried, boiled, shaped, spread… you name it, they do it! I recently downloaded the Zomato app, and La Polenteria popped up when I was searching for a place in Soho. A few taps later, I had a reservation for that same evening – I love efficiency.

The reviews had raved about the service, and I absolutely cannot fault it. Our waiter was attentive, friendly, and knowledgeable, with a genuine smile that could only be attributed to Italian hospitality. The restaurant itself was small and unassuming, with a cutesy feel and overwhelmingly yellow decor.

I hadn’t seen my friend in ages, so it took us some time to focus on the menu amidst catching up on gossip, but we eventually decided to ignore the ‘real’ starters and instead opted for all four ‘polenta cupcakes’. We split each one evenly down the middle and whilst the salmon and mushroom versions were tasty, it was the minced beef cupcake that was the winner of the entire evening. Subtle yet perfectly spiced, not too chewy and wonderfully moist, it nicely complemented the neutral polenta base, whereas the other three felt like they lacked a tiny bit of flavour in order to betruly excellent. 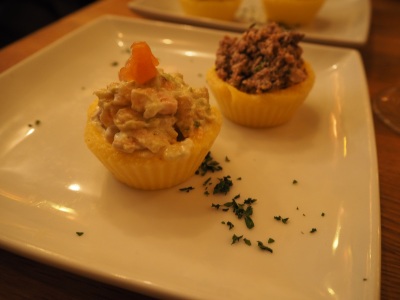 My friend and I are all about sharing (her food blog actually focuses on this – check out Two Girls One Fork!), so ordered two main courses to mix and match. The special of the week, polenta rolls filled with chestnut and a saffron sauce, was good, but almost too polenta heavy! I couldn’t taste any chestnuts, and the overwhelming flavour was more the tomato sauce that was drizzled on top (and I’m not the biggest fan of tomato…). 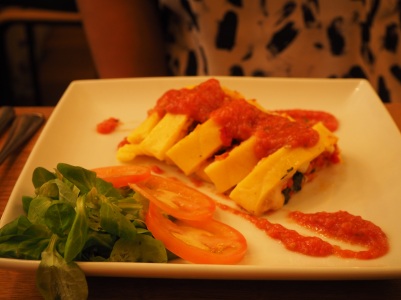 But in contrast, I absolutely loved the beef sausages filled with cheese (was it scamorza? I wasn’t sure), and the fried polenta on the side was supreme. It was definitely my favourite variation of the ingredient all evening! 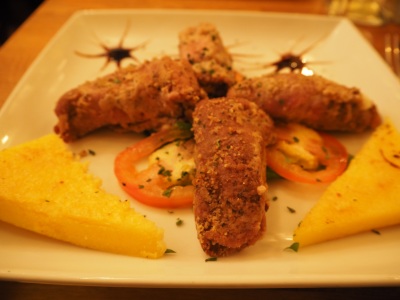 After the meal, both of us were pretty full, so we skipped the sweets in favour of a second glass of wine and Prosecco. This is also because the Merotto Prosecco was some of the best I’ve tasted in a very long time – perfectly sweet and a great accompaniment to all the dishes we ordered. My friend had the Refosco red wine and adored it as well.

La Polenteria has many vegan and vegetarian options as well as fish and meat, making it a truly versatile restaurant that will cater to just about everybody (unless, of course, you detest polenta!). The service was some of the best I’ve experienced in London, as it was friendly and helpful without being overbearing. Most of all, the charm it holds would make me come back – plus I’d also like to see what their new menu has to offer!