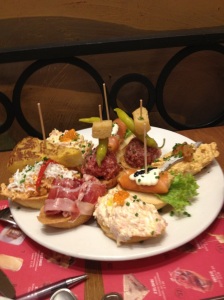 The reason I haven’t posted in a while is because I was travelling – I spent 3 days in Jersey at the Liberation Festival, performing with my dance group from London, and then a week in Barcelona and Madrid on work. I’ve been feeling slightly ill since I got back, which means I have been spending more time in bed and less in the kitchen! However, one review I have been meaning to post is about a wonderful restaurant called Txapela that I went to in Barcelona, which I make sure to visit every time I am there. This time, I even went twice, because it’s just that good! My mother first took me there years ago, and I have subsequently taken my travel companions there whenever I visit Barcelona (which is fairly often, but will never be enough).

I have a very deep affection for Spain, having spent two months there as part of my gap year before university, and one of the primary reasons for this (apart from the superbly friendly people and the sexy language) is the food: Tapas, paella, sangria, Fideuà (which I just discovered) and so much more. Txapela introduced me to the concept of pintxos, which is like tapas, except that each dish is perched, sometimes precariously, upon a small crusty piece of bread. They are a tradition of Northern Spain and are often skewered with a toothpick. Txapela offers almost endless choices, but they make it easy by making your placemat the menu, where each pintxo has a picture. Even someone with no knowledge of Catalan or Spanish would easily be able to order here, and it is probably in Txapela where I learnt the extent of my Catalan (apart from the metro, which helpfully taught me ‘next stop’ and ‘please’). 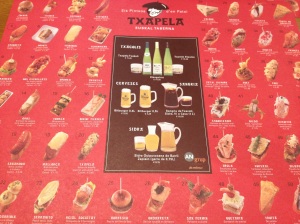 Every pintxo costs between 1 and 3 euros, and it is a perfect place for a snacky stopover. You could eat a full meal here too, but it wouldn’t be as cost efficient, as you will need to order quite a few more pintxos to fill you up! Ingredients include octopus (in Catalan: pop J), jamon iberico, tuna, beef, brie, chorizo, cuttlefish, shrimp… and everything else you can think of. My favourites have always been numbers 33 and 39 (it’s a great place to practice numbers, if you are currently learning Spanish) – 33 being a tuna/cream cheese deliciously spiced concoction on top of bread and 39 a simple skewer of octopus in vinaigrette. But the best thing to do at Txapela (unless you are vegetarian) would probably be just to close your eyes and jab at the placemat – you cannot go wrong! 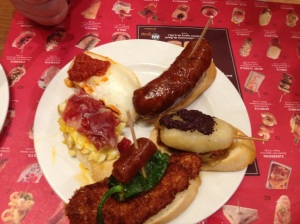 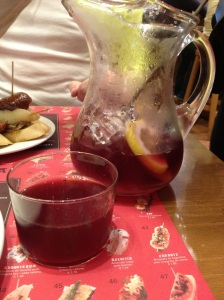 Leave a Reply to buy traffic to website Cancel reply