A few weeks ago, shortly after the attacks on Borough Market that shook all Londoners including myself, I made my way to South London. My destination, however, was not the aforementioned, but rather another market just down the road, the Mercato Metropolitano. The increased police presence around the area was noticeable, but once I entered the market, my worries slowly dissipated.

I’m a Camden girl through and through, but the contrast between my home market and this one is so stark that it hardly merits a comparison. Camden Market is chaotic and busy, and to enter it means enjoying a series of smells wafting through your nostrils, but also a series of tourists stepping on your feet. The food is whipped up at lightning speed, and although the quality does not suffer for it, I can sometimes come away from it rather stressed. Mercato Metropolitano, in contrast, is light and airy, sheltered against the rain, and has ample benches and tables for its customers. The vibe is more relaxed, as friends, families, children, and dogs break bread together, and amidst the hipster hallmarks of craft beer, pulled pork, and cured meats, there is a focus on recycling and sustainability. 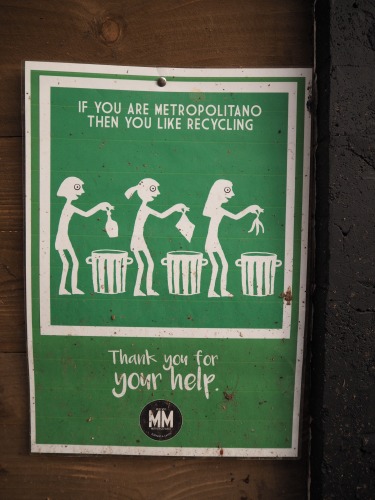 There’s not a plastic plate in sight as food is served on wooden boards, real crockery, or paper plates. There are also a number of recycling points throughout the place, which is far bigger than it seems upon first entrance. Tempted by the sights and smells of pizza, build-your-own tiramisu, and various wine bars, we made our way to the back of the market and Tiny Leaf. 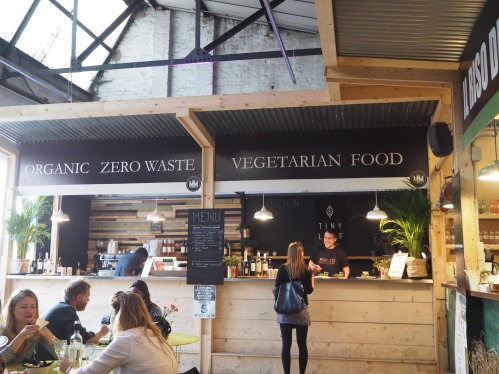 Due to my recent interest in food waste and recycling (avoiding the former and encouraging the latter, more on that here), I was very keen to check out Tiny Leaf, as it champions a zero waste policy. By using ‘wonky veg’ that isn’t pretty enough for supermarkets, as well as vegetables that are about to be thrown out by the same, they create guilt-free and delicious vegetarian dishes for the general public. The menu changes as often as the surplus vegetables, and it’s a fantastic way of combating the 18 million tonnes of edible food that is thrown away in the UK each year.

As we approached, we were greeted with a smile and a wave towards the counter, which showcased their dishes of the day. I immediately spotted the artichoke frittata and was lucky enough to grab the last slice, whilst my friend went for the bubble and squeak. 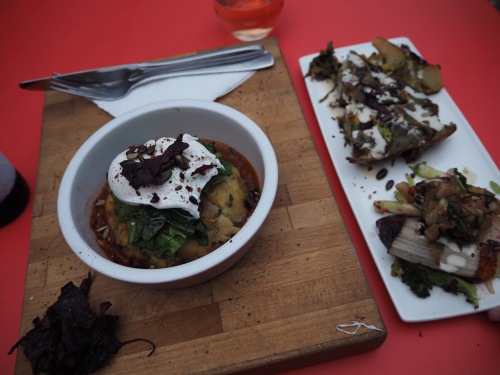 The frittata was stuffed full of artichoke and aspararagus (my new favourite vegetable) and drizzled with tahini dressing, which was absolutely outstanding – in fact, I went back for more and it was smothered on without question. The roasted vegetables on the side had a huge amount of depth and flavour, and I enjoyed every last smoky bite. This was one of the best vegetarian dishes I’ve ever eaten. 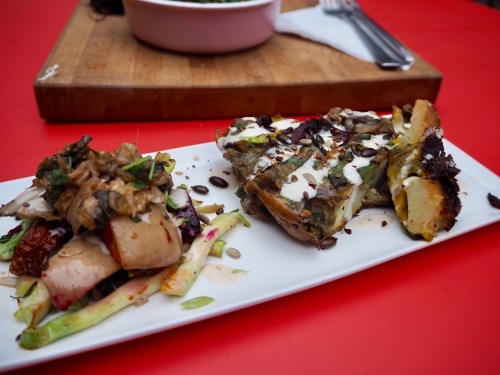 The bubble and squeak was comfort food at its finest, and the perfectly poached egg on top was a great complement. However, we both felt it was missing a little oomph, akin to the tahini dressing on the frittata. 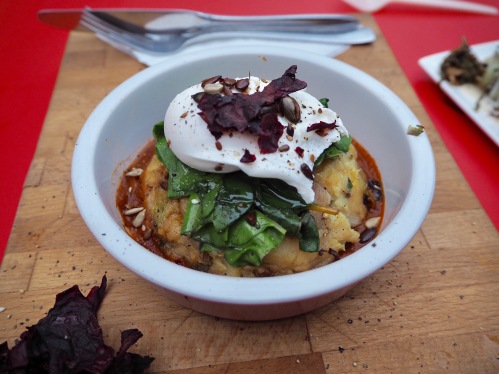 We couldn’t resist trying the carrot cake to finish, which was beautifully moist and nutty, topped with cream I was stunned to hear was vegan. The piece was incredibly generous, so I’m glad we shared it!

Tiny Leaf doesn’t just champion zero waste in their food, as they also stock Toast, a beer made from surplus bread. I was intrigued, and after the first sip, entirely sold. It wasn’t tasty despite being made from bread. It was tasty. Full stop.

Tiny Leaf isn’t exactly cheap as chips, but it provides great value for money, as the mains were £8 and £9, and dessert was £6. This is on par with the prices in the rest of the market, and although it’s vegetarian, I didn’t notice the lack of meat, and was incredibly impressed by the offerings. Don’t forget that they have to invent new dishes every day to use up whatever veg they receive! The employees Sam and Matteo were friendly and jokey, and it’s clear the market has a sense of community – for example, when Tiny Leaf ran out of napkins, the stall next to them was more than happy to help, and handed over an entire packet with a smile.

All in all, a wonderful evening, and I’ll definitely be back to see what Tiny Leaf can whip up next!

I was a guest at Tiny Leaf London, but as always, all views are my own. To find out more about food waste and recycling, read my article on ’10 easy ways to reduce waste’!