Getting out of London: The Lawns @ Thornton Hall Hotel

Living in London is fantastic for a number of reasons: world-class theatre, great job prospects and lots of international food. But sometimes, it can all get a bit overwhelming, which is why I’m a big fan of weekends away. I’ve recently travelled to Lanzarote, Rome, and Dublin, with trips to Munich and Madrid planned later this month. But my 2015 resolution was actually to discover England – a country I am still quite unfamiliar with, despite having lived in London for nearly three years.

In support of this, my friend and I decided to take a road trip up north, to a little place called the Wirral. We’ve both been working very hard (which is also the reason why the blogging has become less frequent!), and so a quiet spa weekend with some great food was just what the doctor ordered.

Thornton Hall Hotel is a beautiful 4-star hotel located outside Liverpool, with an award-winning spa and a newly appointed executive chef, Matt Worswick, who has been featured on the BBC’s Great British Menu. It is a well-deserved feature – his tasting menu is definitely one of the top 3 meals I’ve ever had in my life!

The Lawns is the stunning restaurant located inside the hotel, with a picturesque ceiling (Italian leather, with ceramic from the 1890s), chandeliers, a lovely view over the hotel grounds, and a great soundtrack (I can never get enough of Westlife!). The service was absolutely amazing; from the moment we were shown to our stellar table at the window, to the envelope with my name on it, to always having two people clearing our plates, to the extensive talk about wine recommendations… I’ve never felt so well cared for.

But enough about that – let’s get to the food. I had been told that Worswick is all about bold, British flavours, and this definitely shone through in his dishes. Every course was more intriguing than the last, with many flavours I had never tasted before.

Amuse bouche: Beef croquettes and some sort of interesting cracker

You know a meal is going to be good when they bring you not one, but two, amuse bouches. The first, a supremely tender beef croquette, combined with a slightly meaty cracker, whet our appetites perfectly, whilst the smoked quinoa had some interesting flavours, but didn’t quite blow me away. 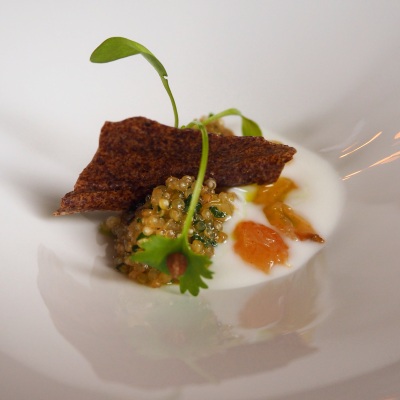 The first ‘official’ course, a Cornish crab tortellini with lobster bisque, had a superbly rich interior and a broth more flavoursome than any I’ve ever tasted, without being overly fishy. The slight hints of ginger and lemongrass shone through, and I wished there could have been more than just the one tortellini.

I didn’t quite understand the asparagus/truffle/parsley/buttermilk thing, but I loved it. The cheesy foam was a nice touch, although we couldn’t taste any truffle in the black shavings. This was quickly remedied by spreading some truffle butter on our perfectly baked bread, though!

The ham and lamb sweetbread terrine was underwhelming at first, but actually improved with every bite, so we loved it by the time we were done. My friend was a huge fan of the pea puree and mopped up every last drop with her bread! 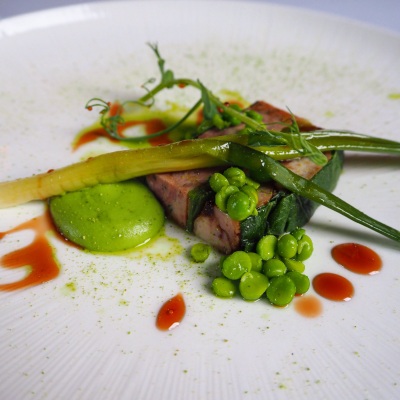 And then… the red mullet. I made only one note on this dish: FABULOUS. It blew us away. The crispy skin on the fish, the slightly fried gnocchi, the black olive paste… I never wanted it to end!

But it was the lamb that cemented my opinion on Worswick’s bold flavours. It was truly spectacular, and put the lamb I had at Hix Soho recently to utter shame. The potato mash was the best I’ve ever tasted, and the chanterelles were perfectly fried. Every ingredient on the plate complemented the other, whilst also standing out on its own.

We had chosen a Moselland Riesling Kabinett to go with our meal, and it perfectly complemented every dish without overpowering the palate. At this point, we were nearly three quarters into the bottle, and so when our waiter announced that he was bringing us a pre-dessert, I had to stifle a chuckle. Pre-dessert? Really? But when I took a bite of the camomile panacotta and orange jelly, my palate was immediately refreshed, proving that pre-desserts are utterly and absolutely necessary. 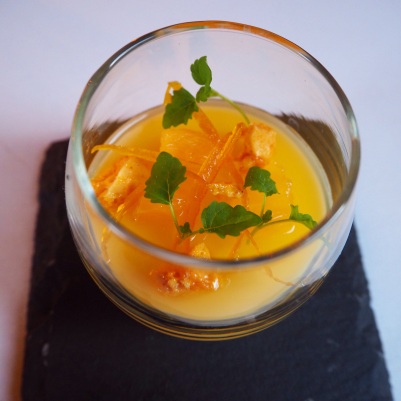 Our first (or technically second) dessert was a raspberry cheesecake with beautifully fresh elderflower sorbet. A winner all around. 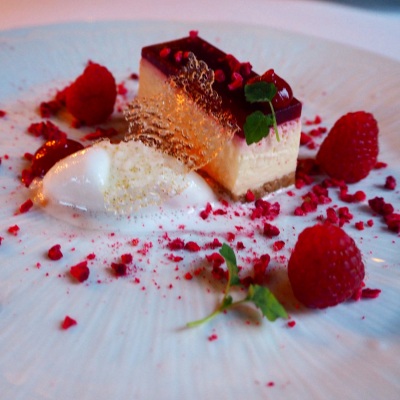 And finally, the strawberry and vanilla parfait. The parfait itself was the only thing in the entire meal that tasted a little artificial, but the champagne poached strawberries made me realise that strawberries were never meant to be eaten naturally. I henceforth resolve to soak all my strawberries in champagne!

Our experience at Thornton Hall Hotel could not have been better. The spa offered rest and relaxation, and it was a wonderful weekend away from the hustle and bustle of London. Most of all, it was a lovely feeling not to feel in the slightest bit rushed as we ate. Too often, London restaurants show you to your table and warn you that it has been booked for 1.5 hours later, so you’d better eat fast and clear out. The Lawns was the absolute opposite, as we grazed, munched, sipped our wine and gazed at the view. It was the most relaxed evening I had spent in weeks, and an absolutely perfect getaway. I highly recommend it, not the least because of the wonderful food!

The biggest bed I’ve ever slept in!

I was a guest at The Lawns and Thornton Hall Hotel, but as always, all opinions are my own.

4 thoughts on “Getting out of London: The Lawns @ Thornton Hall Hotel”