A couple of weeks ago, I went to Madrid to visit my sister for 3 days. It was a lovely getaway from wintry London, and despite the temperature not being quite as warm as expected, the sunshine more than made up for it! And then there was the food…

I’ve been to Madrid a couple of times, but I’ve never properly experienced its lifestyle. Having a local take me around made all the difference, as I was made to appreciate the city far more – namely all the cafes, restaurants, little shops and tapas joints! In the restaurants of Madrid, the food tends to be quite similar, but it is the interior design and atmosphere that really makes a difference. With Juanalaloca though, it was both (be sure to take a look at their website here, there’s a cute little video on the homepage which will make your mouth water…). It is named after one of the queens of Spain, who was nicknamed ‘Juana the Mad’ due to her mental illness after marriage.

‘Juanalaloca has the best tortilla I’ve ever tasted’, proclaimed my sister, and after one bite, I was sold. I love tortilla, and I’ve eaten it more times than I can remember, but their addition of caramelised onions added a slight sweetness that just blew me away. 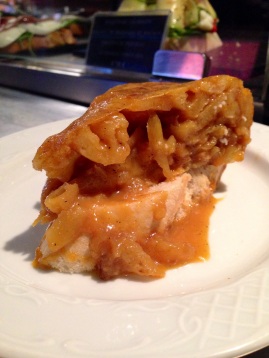 We then cast our eye over to the bar, where the pintxos stood ready. Our sisterly connection meant we were in complete agreement about what else we wanted to eat: el huevo increible (yup, that’s the ‘incredible egg’) with truffles, spinach crepe with baby eels (don’t knock it til you’ve tried it) and after slight deliberation, the mushroom and truffle croquetas. These were a mistake, as the truffle taste was barely noticeable and we were actually already full. 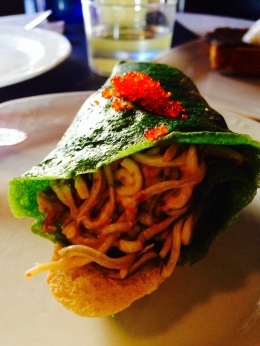 As these were pintxos, they were all served atop a crusty slice of bread. The egg was truly incredible, as it was poached (my favourite type of egg) and the truffle taste infused my taste buds. The baby eels were delightfully garlicky and thus a big hit with both of us.

Juanalaloca was very busy, but it was really not much of an issue, as we ate the tortilla standing at the bar and were then seated a short while later for the rest of our food. If you’re travelling to Madrid, I highly recommend paying this place a visit, even if it’s just a quick stopover for a slice of tortilla! Just… eat the tortilla.

One thought on “Juanalaloca – best tortilla in Madrid”