This is a guest post, written by Craig McNee, a cheese connoisseur who also wrote about our trip to La Cave à Fromage. It describes the first three cheeses that made up the incredible cheese platter we had for our dinner at the Weekend of Food 2014, which was kindly provided by La Cave à Fromage. You can read about the rest of the cheeses here.

We served the cheese board with a raisin and walnut loaf (also provided by La Cave à Fromage) and a simple green salad with toasted walnuts.

After our visit to La Cave à Fromage we took away five of the six cheeses that we tasted to make our cheese board. As a course in a larger meal, you should plan to serve about 100g of cheese in total per person (so that there’s still space for dessert…). We arranged our cheese by the principles that Nicolas taught us. A cheeseboard should be approached starting with the mildest cheese to the strongest, so that the palate isn’t overwhelmed early in the game. This means that the lightness and acidity of goat’s cheese is the best to begin with, progressing to a rich and creamy blue cheese to finish. Here we have all six cheeses falling under the French Appellation d’origine contrôlée (AOC) designation, meaning the producers adhere to strict rules to qualify for these prestigious titles. At this time of year, mountain cheeses from the summer (or the previous year’s summer) are in season so we have the Pyrenees, the Alps and the Vosges mountains represented.

The fourth course of our decadent dinner

1: Sainte-Maure de Touraine (AOC): Our first cheese could be confused with a nugget spewed forth from the belly of Eyjafjallajökull. But our ashy little roll isn’t a volcanic rock, but a light, chalky goat milk cheese from the Loire region of France. The ash protects the soft young cheese and neutralises the acidity, encouraging the growth of the rind and subtly adding to the flavour. When cut into you find a piece of straw inside that helps hold the cheese together and is an odd reminder of the raw-raw-raw ingredient behind this cheese. The Sainte-Maure went down well, even with the non-goat lovers in our group. We found it mild, lightly acidic and well-paired with a wine from the Loire, for example, the Pouilly-Fumé that we tasted at La Cave à Fromage. On the evening we actually ate this with a Riesling, whose refreshing acidity balanced that of the cheese. A good hint for wine pairing: simply match food with wine from the same region. After all, hundreds of years of practice have been put into finding a drink that goes down well with what’s on your table. A demonstration of the wisdom of eating locally!

2: Ossau-Iraty (AOC): The second cheese we tasted at La Cave, the Ossau-Iraty (AOC), comes from ewes that frisk the mountains of the Basque region. This hard cheese reminded us of a Manchego, but this might be more due to our limited knowledge of Spanish cheese (maybe an idea for next year’s WoF?) It was the only one that didn’t feature on the WoF cheeseboard. It wasn’t that we didn’t like this sheep milk cheese, but it just wasn’t as remarkable as the next one, another firm cheese. In the Basque region, cheese would be accompanied by local black cherry jam, but it would go equally well with some quince jelly and a glass of Sauvignon Blanc or even better, a typical south-western Sémillon.

3. Beaufort d’Alpage (AOC): Beaufort comes from a family of cheeses that you’ll know as Gruyère, which also includes Comté, France’s favourite hard cheese. What’s common to them? They’re hard, pressed, unpasteurised cheeses that are deliciously nutty and slightly sweet. This cheese is produced in the mountainous Savoie region in the east of France bordering Switzerland. But wait! This is even more special. The ‘Alpage’ refers to the summer practice of marching the cows up onto higher mountain pastures to graze, during which time the herders keep busy in their chalets producing cheese and butter from the milk they collect. Rest assured, this is no summer holiday. Due to the variety of summer flora, the cheese (which may be aged up to 16 months) is noted to be more fragrant than the cheese produced from the cow’s milk collected in the winter, a good example of seasonality in cheese. We found this cheese really delicious. It was sweet, salty, nutty, and had a peculiar piquancy that slightly nipped the roofs of our mouths, which might be a good thing otherwise I could sit and eat my way through a whole wedge. This paired well with our light-bodied Pinot Noir, not overwhelming the subtly balanced flavours of the cheese.

The wines that we paired with our cheeses were:

If you would like to learn more about any of these cheeses, do visit La Cave à Fromage in one of their three locations: South Kensington, Notting Hill and Brighton. 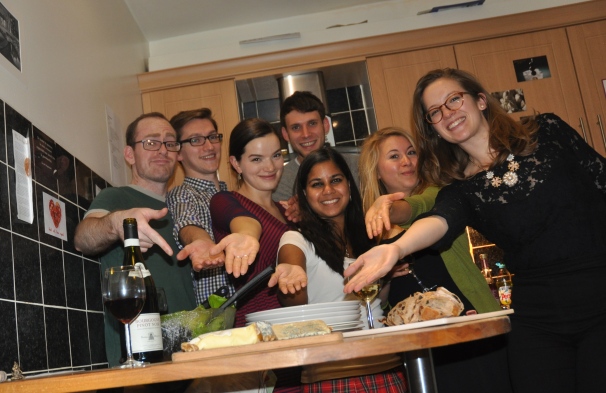 The Weekend of Food party, celebrating the cheese board