Last Saturday, I had a reunion with 3 girls from my university dance troupe. As it happens, we all live in London now, and this was the first time we’d all seen each other in 2 years! Naturally, I was asked to find a suitable watering hole, and after some research, I decided to try Foxcroft & Ginger, a small place in Soho that boasted great sourdough pizzas and coffee.

When I walked in, it was even smaller than I expected, but it felt cosy and we took a table downstairs. Due to the nature of the evening, we spent the first half hour chattering excitedly and catching up on news before realising we hadn’t been asked to order anything. We then managed to grab a waitress, who told us there was no table service downstairs so we’d have to order upstairs, and that they were only serving pizzas.

The four of us ordered 3 out of the available 6 pizzas, but when I went up to order it took the girl about 5 minutes to understand and correctly enter the order into the system. There were water bottles and small glasses next to the counter, and I was told I could take some for the table – a hipster concept that is becoming more and more common. 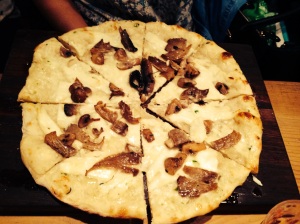 We were a little disenchanted with the surroundings, as there was a leak in the ceiling next to us, which kept dripping into a bucket, as well as huge sacks of flour lining the floor. When our pizzas arrived, our waitress mixed them up but we rearranged them and tucked in. I’ve never had a sourdough pizza before and I really liked it – it almost had a slightly sweetish taste and felt less filling than normal. A huge plus for me was that they had a couple of vegetarian options amongst the 6, and the one I chose actually came without tomato (ideal for a tomato-hater like me). I had the halloumi, bechamel and mushroom pizza and it was incredibly tasty due to the mixed mushrooms and thin slices of halloumi (my current obsession).

Verdict: Good pizzas at very reasonable prices (£7.50 for the pizzas we ordered and only £4.95 for the very simple ones), service and atmosphere mediocre. Ideal for those who are yeast-allergic due to the sourdough. I’d like to come back and try their brunch options though, as they looked pretty tasty!