Having just returned from a 2-week holiday in India, I returned with a new cookbook and a myriad of food memories. I also have a strong resolve to improve my Indian cooking skills, particularly the vegetarian ones. Luckily, the options are endless, as a large part of the population doesn’t eat meat or fish!

One vegetable we couldn’t get enough of on our trip was bhindi (also known as okra or ladyfingers). Deep-fried, masala, covered in coconut… you name it, we ate it! So it was only fitting that the first meal I cooked upon my return involved this beautiful versatile vegetable.

This recipe is taken from the book ‘Indian in Six’ by Monisha Bharadwaj, which uses between 6 and 10 ingredients for each recipe, but does not compromise on taste. I hope all her recipes turn out as well as this one! As always, I varied it slightly, but I did not add any ingredients to the 9 that were used. The turmeric gives the dish a lovely yellow colour and the yogurt lends a nice texture. Goes well with rotis or rice!

First, wash the okra and lay it out on a tea towel to dry. Cut off the tops and then slice them in half lengthways. 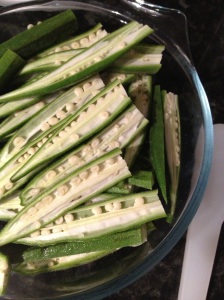 Mix the yogurt with the besan and water and keep aside.

Heat the oil and add the mustard seeds. Once they begin to pop, add the turmeric and ginger paste. Stir quickly and then add the okra and salt. Stir gently until the okra is coated with the spice mixture and fry for 3-4 minutes until slightly crisp. Then pour in the yogurt mixture and heat again. When it gets hot (not boiling), reduce the heat and cook on low until the sauce thickens. Keep stirring to avoid curdling and serve after another 5 minutes. Enjoy!

I like my okra a little tender – if you prefer it soft then add some water before adding the yogurt mixture and cook for an extra five minutes.